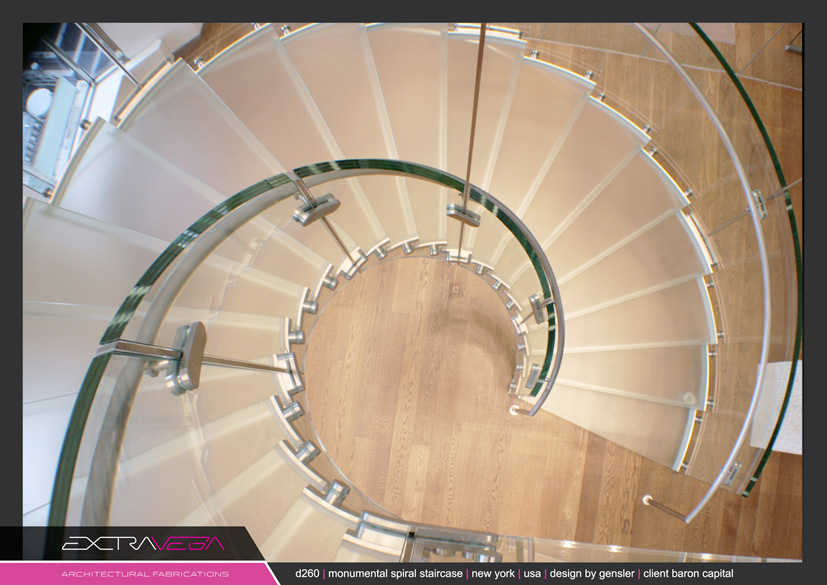 General Motors Building, 49th Floor. Spiral glass staircase suspended from ceiling. In collaboration with Gensler, the clients sought a stunning centerpiece for their new office, forty-nine floors above Manhattan’s streets. A glass curved staircase. The design was a challenge. Less support. More details. And suspended a half inch off the floor. We have never seen nor fabricated a staircase more technically difficult to execute.

A astounding spiral glass staircase suspended from the ceiling of the fiftieth floor, made entirely of structural glass inside the headquarters of Baron Capital, a financial company, becomes the symbol of the creative philosophy of Extravega, a made in Italy company founded by an illuminated entrepreneur: Antonio Rillosi. His constant research in experimentation, the foresight in understanding how the synthesis between craftsmanship and technique is the cornerstone of perfection, attention to custom-made and putting the user first has led Extravega to conquer the world. In a new architectural Renaissance. From the Milan area, he arrives in London, New York and Sydney to introduce his savoir-faire to the world in the universe of metals, carpentry and construction art. Using a modern and, at the same time, eternal material such as glass. «Since its foundation, the company has always distinguished itself for an innovative approach to design by promoting new technologies, including, in 1985, the first numerical control machines, 3D modeling, fiber optic laser cutting and the most efficient building systems in the world. And paying particular attention to experimentation, such as our development of liquid metals, without ever forgetting how much the human hand is the determining factor for constructive perfection and aesthetic results » explains Rillosi. A vision in which the master craftsmen and the machine become a symbiotically constant dialogue: «As I happened to say at the party for our 33rd anniversary, there is no key to success but a series of actions that see a group of people: collaborators, suppliers, architects and end customers. The real secret for these actions to lead to success is to do them all with the burning desire to do them our best.” Following this philosophy within the project for Baron Capital, the imposing glass staircase represents the experimental quintessence of Extravega, an architectural and engineering masterpiece, without a base, suspended between the 48th and 50th floors of the General Motors Building. «The use of glass as a structural material in such a unique project – explains Project Manager Alessandro Boarolo – is already innovative in itself. Extravega’s know-how in this sector has made it possible to create an ambitious and unrivaled product in the world with the collaboration of Eckersley O’Callaghan, the structural builders of many of the most futuristic Stores in the world.” Anchored to the structure of the building, supported by a glass bridge hinged to the slab, this oscillating artefact surprises for its extreme aesthetic lightness and elegant glass curves. «The staircase was engineered in Extravega, starting from the designers’ rendering only» says Boarolo. «The system, considering the weight of the staircase of almost 8 tons, takes into account the natural oscillations of the building, limiting the inertial mass of the staircase. All components, made with the highest quality materials, were engineered in Extravega and structurally analyzed by the team of engineers.» A construction system in which the company’s know-how is revealed in every meticulous detail: «The design and engineering phase took place entirely in our technical offices where a team of designers built the mathematical model of the staircase used for static analysis, and subsequently the three-dimensional model used for production. The behavioral analysis of the glass structure was one of the most complex phases as was the installation phase, coordinate by David G. McWilliams and his collaborators in JRM Construction Management: a particularly difficult challenge precisely because of the experience needed for such a daring project.” An unprecedented realization in which the glass transforms into a spiral structure, hanging from seven tie rods made of one of the most resistant materials in the world. «The type of material used to hang the custom spiral staircase suspended on the ceiling structure is duplex steel, chosen by the designers for its resistance in extreme conditions. In fact, duplex steels have a very high mechanical resistance, as well as the necessary corrosion resistance both in highly acidic and caustic environments, and these were precisely the characteristics desired.” In an authentic construction revolution, the totemic element that has characterized the entrance to the Baron Capital office has led Extravega to develop a new construction typology never experienced before: «The composition of curved glass with radii never attempted before, combined with the very precise coupling of edges and holes in the glass, the three-dimensional post production tests of each single part as well as the coupling techniques of the slabs specially designed for this project are what makes Extravega a cutting-edge company.» An exclusive and sophisticated idea of interior design in which the choice of materials combined with bold forms represents the excellence of custom-made, transforming architecture into art. Between engineering and research, the made in Italy company interprets the contemporary, also paying attention to environmental sustainability. An eco-friendly approach that relates to the origin of raw materials, the method of transforming products and transportation, thus optimizing the entire process: from design to production, from logistics to installation. Essential factors that have become an integral part of a philosophy that pays attention to detail, in a sustainable and revolutionary vision of “tailor made.” 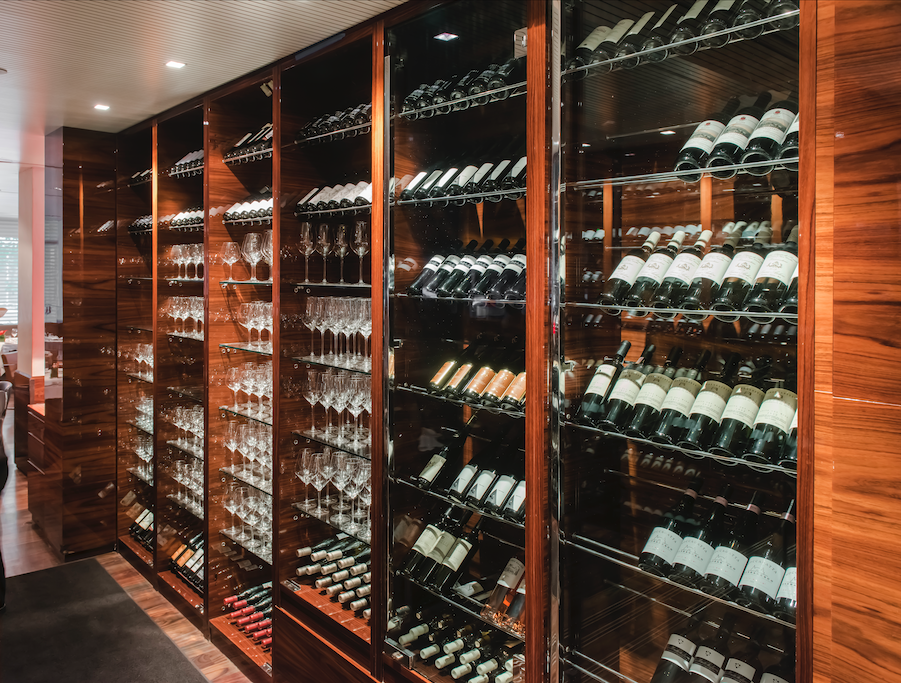 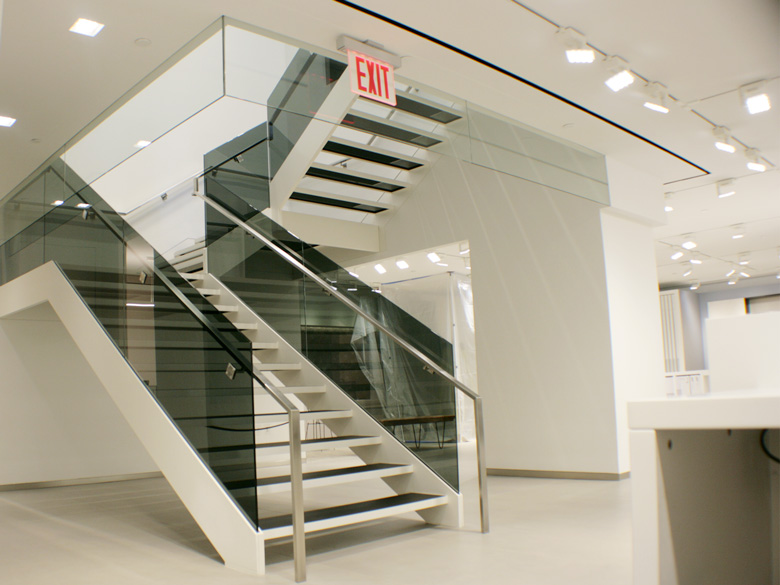