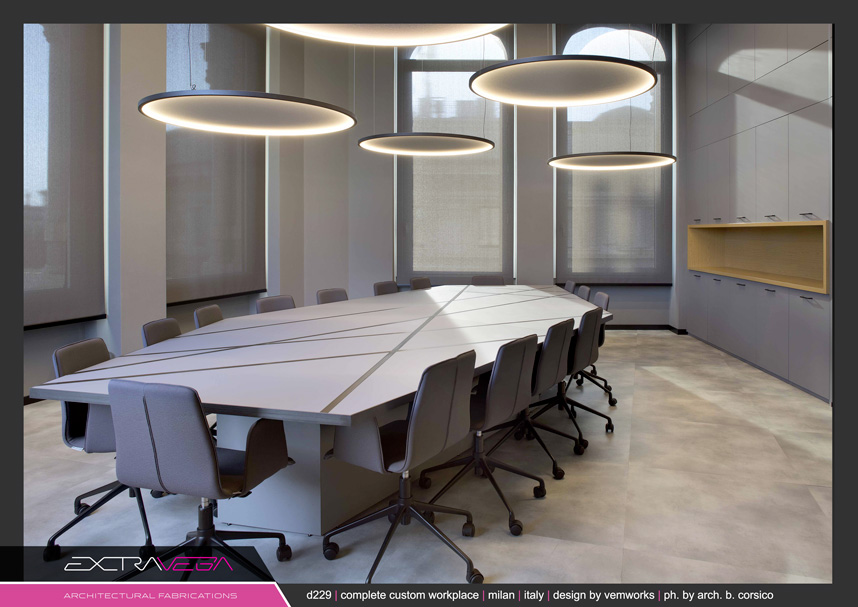 Extravega act as General Contractor for the construction of Axpo Italia. The atmosphere that is perceived upon entering the new Axpo Italia headquarters in Genoa and the offices in the historic center of Milan is an authentic sensorial emotion. The combination of elements with a strong industrial character, with a refined aesthetic, with a rock flavor exactly fit in with the creative vision of the Vemworks team.

Axpo’s headquarters and offices, both in Genoa and in Milan, were an important and all- encompassing project for Extravega. As General Contractor, Extravega followed suit the two construction sites entirely: from building and plant engineering works to the tailor-made creation of all the elements present in the interior design such as the glass partition walls, the tables for the offices, the preparation of the open-space. Extravega also handled the installation of the electrical and mechanical systems, entrusting the planning to the Engineering division of Lombardini22 with which a relationship of fabulous collaboration. The Paderno Dugnano company has dedicated itself to the construction of each piece of the design: from light building construction to the manufacture, from the stairs to each piece of furniture, both inside and outside.
The client needed the two sites to be completed in strict compliance with the agreed timing: in the health emergency situation linked to Covid-19 it was a genuine challenge that as general contractor, Extravega has faced with extreme attention to government restrictions. The layouts of both locations consist of reception, public waiting areas and reception areas, open space with workstations, meeting rooms and private offices divided by glass walls, relaxation zones equipped with kitchen, a location for informal meetings. In Genoa, the headquarters are spread over four levels, from the 7th to the 10th floor, the latter conceived as a multifunctional area: equipped with movable walls, it can be transformed into an event space. On the 10th floor there is also a large terrace, perfect ambience for corporate parties or business meetings.
In Milan, on the other hand, the Axpo offices extend to the 5th floor of the TheAngle building – the small Milanese Flatiron – wrapped in an elegance that evokes ancient salons of the city. Two new locations for renewable energy by AXPO Italia (AXPO Group.) “Initially it was necessary to find a common thread and a visual identity for Axpo – explains the architect Emanuele Corte – describing this company with a precise design language. A language narrated through the idea of sharing spaces and freedom of movement, creating a continuous flow between individuals and their thoughts, exactly as it happens for energy: particles accelerating, and nuclei and electrons move at insane speeds…”
Extravega’s bespoke – extreme custom made, as they like to call it – has shaped all the design elements, emphasizing the unique language of both locations: from the walls equipped with self-laying flooring without glue, from the manufacture of the internal staircase that connects the ninth and tenth levels to the outdoor benches in solid wood. And again, the dividers furniture, windows with cushion on the sills transformed into unexpected “lounges,” painted steel tables created with the revolutionary Fenix laminate. “The use of this particular laminate – says the arch. Corte – was recommended by Extravega for its avant-garde features: antibacterial and self-healing. Just another example of Extravega’s impressive research and development.” Innovative tables appear as totemic elements: inspired by the Axpo logo, the X – broken down, rotated and shifted over the entire surface of the top – made by Extravega with a flush brass insert, a precious material used in the finishing of the perimeter edge. “The red X – explains Corte – and metal, the conductive material par excellence, are loaded with symbolic values: iconic traits that identify the continuous exchange of thoughts and energy.” In the idea of creating an orderly and accurate environment, the design of the tables was studied to hide the chaotic “jungle” of cables. A central structure acts as a double-sided chest of drawers that contains unsightly wires – which can be opened for maintenance – and access the data network. Every detail has been optimized by EXTRAVEGA’s master craftsmen, thus guaranteeing the highest quality manufacturing that distinguishes the company.
The private offices have partitions made with safety and acoustic windows. They filter natural light but, at the same time, create a dialogue with the environment. In a careful aesthetic play, the existing columns are included in wall units by Extravega, conceived as storage spaces for paper material and support for monitors.
The exciting wallpaper designed by the Vemworks team is a tribute to Nikola Tesla, a reinterpretation of an energy accumulator drawing that the great inventor deposited in the United States around 1910. In line with its forward-looking vision, Extravega Architectural Fabrications – champion of truly human leadership – has introduced the philosophy of TIS – a workplace revolution and acronym of The Italian Sign. TIS is a subsidiary company founded in 2011 in New York by Antonio Rillosi along with a futuristic production site in a large technological factory in Bergamo. 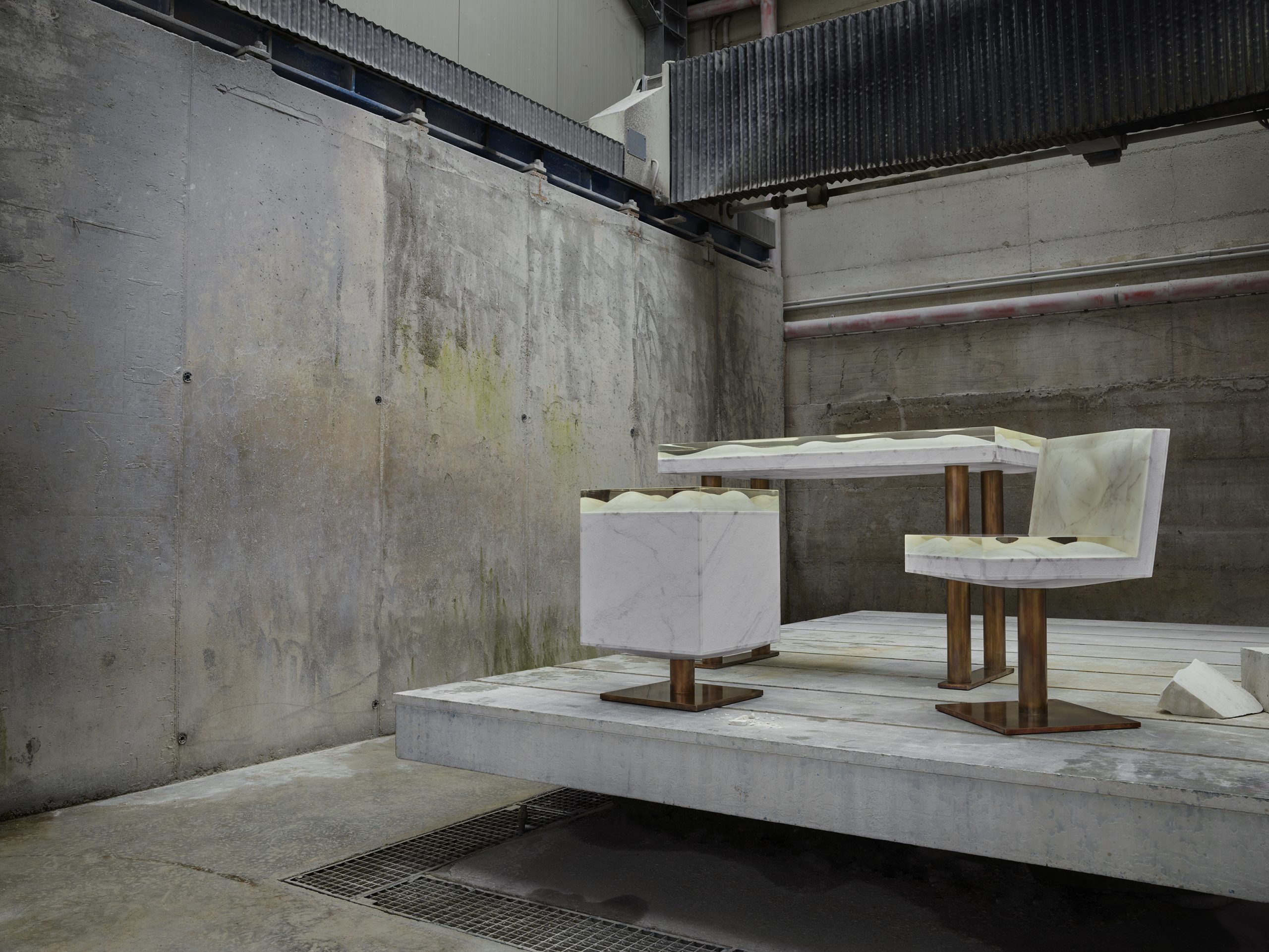 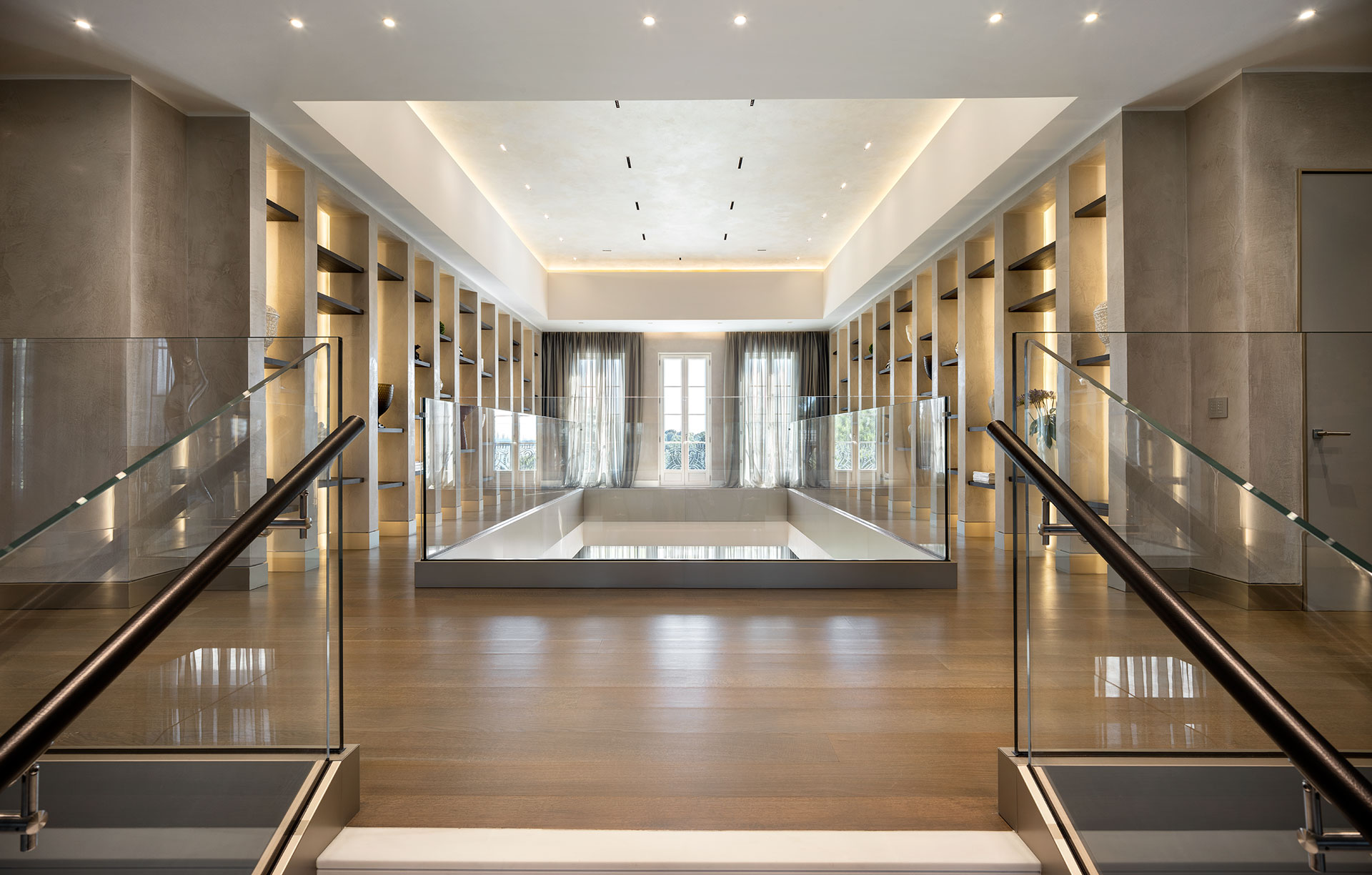